WordDriver is based on the evidence supporting the dual-route model of skilled reading (Coltheart, 2006), Ehri's phase model of reading development (Ehri, 2005), and Share's phonological recoding theory (Share, 1995). Research examining these theories has shown that:

Our preliminary research suggests that this intervention has the potential to be an efficient evidence-based component of reading interventions for children with severe and persistent word reading delay (Seiler et al, 2019 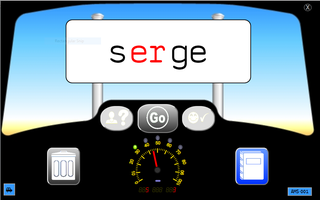 WordDriver displays graphics on the screen that use an analogy of learning to drive a car. A functional version is being made available without charge for clinicians and other researchers to examine and perhaps integrate into their own projects. We would appreciate feedback and discussion about any aspects of WordDriver and this project - please email info@elr.com.au

Within the testing modules (T-Plate):

From the loader module

All modules are delivered as described in the above overview, except the L-Plate. The L-Plate occurs in WordDriver-1 to familiarise the student with the software, and to teach the decoding process at each level (i.e., 3-letter, 4-letter, and so on). As a teaching module, it differs from the P-Plate and D-Plate in two ways. First, the instructor does all actions: touching the Go button, demonstrating decoding, and putting the items in the Book or Bin. Second, the Help button is used for all items as this allows increased opportunity for the instructor to teach the decoding process - sounding out and blending.

Following pre-intervention assessment, the instructor determines an appropriate starting level (2-letter, 3-letter etc.). Progression to the next level (eg from 3- to 4-letter items) occurs once the student achieves 90% accuracy at the current level. For example, if a student is on 3-letter words, a score of 90% on the P-Plate allows progression to the D-Plate; and a score of 90% suggests the student can move to the 4-letter level.

There are 41 nonword lists, each comprising items with 1:1 letter-sound correspondence. To deliver the T-Plate, the instructor selects the list and the length (70 or 35 items), and the T-Plate is administered as described above. Complete nonword lists/response forms for these T-Plates are available here.

From the loader module

On selection of a P-Plate and D-Plate, you are presented with a choice of targets. This allows you to provide specific intervention for one or a group of digraphs.

Following intervention of the selected target digraphs, you may wish to then include "Foil" words (words and nonwords which contain only short vowels), as this develops discrimination skills. For example, to accurately decode "rat" versus "rate", or "hut" and "hurt".

Each T-Plate currently allows assessment of a group of digraphs. This allows the instructor to measure change in the targeted compared to untreated digraphs. Delivery is as described above. Complete nonword lists/response forms for these T-Plates are available here.

WordDriver can be shared in teletherapy sessions as a "shared screen" in Zoom, and as the "Add-On" WordDriver for Coviu. On either platform, both presenter and the client can interactively share the mouse/touch controls.